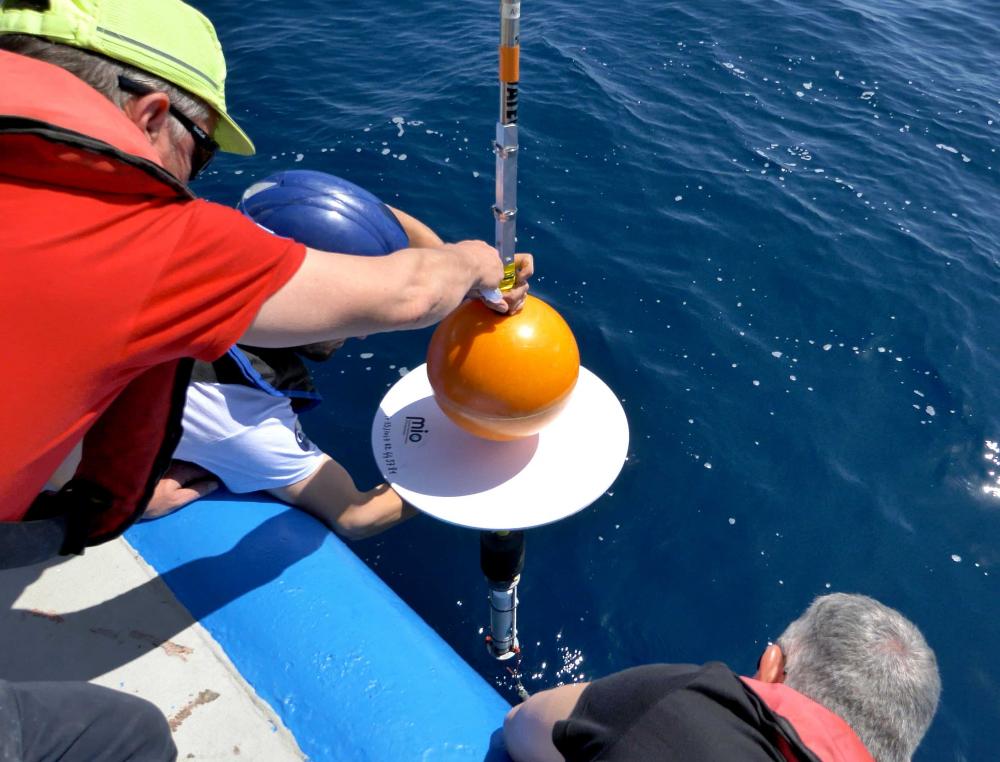 Measuring vertical velocity in the upper layers of the ocean is crucial to understand fine-scale ocean dynamics. That is why the Mediterranean Institute of Oceanography (MIO) , has developed a new vertical velocity profiling system – to complement measurements collected by ADCP and ocean gliders. The prototype profiler was deployed at sea during the FUMSECK cruise and the preliminary results are very positive.

The FUMSECK campaign is a one-week campaign in the Gulf of Genoa onboard the R/V Téthys II. It is part of the BIOSWOT project lead by the French Space Agency, CNES, the French University LOCEAN-IPSL and MIO in order to prepare for the SWOT satellite mission (launch in 2021). The objective is to test different instruments that could be used to observe three-dimensional fine-scale ocean dynamics over the course of several weeks.

One of the instruments tested during this mission was the vertical velocity profiler developed by Jean-Luc FUDA of MIO and his team. This instrument is equipped with a release mechanism, a pressure sensor and is attached to a very small Argos drifting buoy. Once it reaches a depth of 200 m, it is separated from its ballast via the release activation, and floats back up to the surface very slowly.

In order to track the instrument and its valuable data, the team used an Argos goniometer, on loan from the national marine instrumentation facility (CNRS-DT INSU) in Brest. The goniometer is designed specifically to allow users to find active Argos PTTs in the field, within a radius of 100 km. This highly sensitive direction finder is an excellent tool for the quick recovery of expensive ocean equipment – and all the precious data recorded onboard – using the Argos satellite telemetry system.

The benefits of the Argos goniometer

“We were nervous about losing our equipment. But the hands-free software was easy to use and made finding the small Argos drifting buoy attached to the profiler very easy after each deployment, ” explains Jean-Luc Fuda.

During the FUMSECK cruise, the vertical velocity profiler was deployed 6 times, and each time it was successfully recovered very quickly thanks to the goniometer, even in rough sea.

This goniometer is fully waterproof and is useful for finding any Argos transmitters in the field, including animal tracking tags, such as bird tags and pop-ups, or any Argos-equipped ocean platforms.

Know more about the goniometer

How to use the Argos goniometer:

The MIO research laboratory is a component of the OSU-Pytheas Institute and is under the joint direction of Aix-Marseille University, Toulon University, CNRS and IRD. MIO’s goal is to better understand better the oceanic system and its evolution in response to global changes. It therefore has a center of expertise in marine biology, ecology, biodiversity, microbiology, halieutics, physics, chemistry, biogeochemistry and sedimentology.

More information about the FUMSECK cruise: article in French