The CEPPOL, the French Navy’s Practical center of expertise for pollution control, has deployed six Argos buoys to help containment efforts in the Atlantic Ocean.  The buoys, provided by CLS, were deployed after the Italian ship, Grande America, sank on March 13th, 2019, emptying 2,200 tons of fuel into French waters.

Today, 6 Argos SLDMB (CODE) buoys are deployed in the Atlantic Ocean to help experts from the CEPPOL track the polluted zones as they drift. The first four buoys were strategically deployed by Falcon 50 jets belonging to the French Navy on March 13th at midnight. Two additional buoys were deployed by jet on Tuesday, March 19th.

The buoys send a GPS position every 30 minutes, along with sea surface temperature measurements. CLS processes the data at its operational data center in Toulouse, making them available via the ArgosWeb data visualization interface.

The data the Argos buoys relay is used by the authorities in drift models. The buoys’ positions are important information that is used by the French Navy to coordinate their anti-pollution measures. 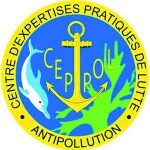 The French Navy, in collaboration with the Practical center of expertise for pollution control (CEPPOL), is responsible for pollution control and prevention. CEPPOL is based in Brest for practical reasons such as ease in testing material at sea, regular training with BSAD, and testing new methods of containment. The center of expertise has a central and national role in fighting against most types of pollution (hydrocarbon, chemical, containers). The CEPPOL is also responsible for preparing the Navy to face environmental responsibilities and coordinating with other responsible authorities for clean-up efforts.

To learn more, read our article, Grande America oil spill, what did we see from space?